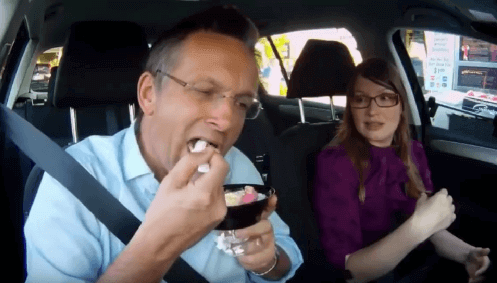 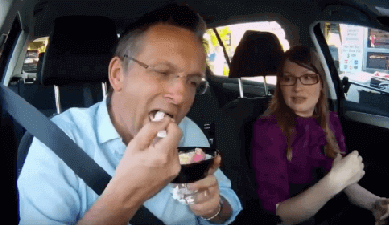 Two popular authors in the ever-busy niche of dieting used to be friends, good friends at that. But not anymore.

In this multi-billion dollar world of diet books publishing, all is not quite all it seems on the surface. A little tectonic shift has ruined what was once a cosy relationship.

We now live in a modern, interconnected world that is so globalized you’d think the world has become one small village. This whole new status quo is enhanced by technology.

With this all new way of modern life comes a lot of noise. A whole lot of noise, some of it analogue and most of it now digital.

In that cacophony of noise, it is very easy to step on each other’s toes. When this happens, some people aren’t going to go quietly, they will fight back.

…and it does get catty, really catty.

Enter Krista Varady and Michael Mosley into the boxing ring.

But before then I should say that cat fights in the digital and analogue world aren’t new. Before I delve into the shenanigans between Michael Mosley and Krista Varady, it might be appropriate to remind us of a similar cat fight between two technology heavy weights the world has ever known.

Someone once described Steve Jobs and Bill Gates as frenemies and he was right.

Bill and Steve’s relationship goes way back to the early 80s. Steve Jobs was an ideas machine and Bill was the programmer who can help bring ideas to life. So, it looked like a relationship made in heaven, right? Hmm, maybe.

Bill and Steve would meet regularly as often as the partnership demanded. Bill would eventually fall for Steve’s weird spiel and assign a team of programmers to work on Steve’s project which in his opinion was to change the world. What a visionary he was. Did he succeed in the end or what?

Bill’s recollection of Steve’s spiel was something along the lines of:

> “It was kind of a weird seduction visit where Steve was saying we don’t really need you and we’re doing this great thing, and it’s under the cover. He’s in his Steve Jobs sales mode, but kind of the sales mode that also says, ‘I don’t need you, but I might let you be involved.”

Anyway, the working relationship between the pair blossomed but there was always an air of suspicion between them. Steve was the more paranoid of the two and probably for good reason too. The inspiration for their project was from the Xerox Alto system.

Unforeseen hitches meant there was a delay in the proposed Apple launch in 1983. That’s life, isn’t it? Even the best laid plans never sail smoothly.

For Bill though, Steve’s failure to launch had a different meaning at least from his point of view anyway.

Bill saw an opportunity and pounced. Bill made a decision to launch Windows on IBM computers based on that Xerox’s inspiration – the graphical interface that is. Steve naturally felt betrayed and was very angry. The two giants had a meeting that was supposed to clear the air but as you can tell anger makes people lose all perspective.

In the clear-the-air meeting where Steve was raving and ranting, Bill sat quietly and after Steve was done, Bill retorted:

> “Well, Steve, I think there’s more than one way of looking at it. I think it’s more like we both had this rich neighbour named Xerox and I broke into his house to steal the TV set and found out that you had already stolen it.”

The long and short of it is that Steve felt ripped off but Bill thought otherwise and so the feud between the pair continued but eventually they buried the hatchet before Steve passed away.

Even in all of these rifts and make-ups, both technology giants had mutual respect for each other’s ability and vision. Their styles may be different but their goals were essentially the same.

These two are by no means on the same scale as Bill and Steve but there is some similarity in how Krista and Michael fell out with each other.

Krista has been working tirelessly on the concept of intermittent fasting. Alternate day fasting to be more precise. By that I mean, getting deep on the research. Krista has probably done more research on the subject of fasting than most people in the last 12 years or so.

If you are looking for scientific evidence backing intermittent fasting, then you won’t go far wrong to look at Krista Varady’s work. It wasn’t therefore surprising that Michael Mosley turned to Krista when he had the idea of doing a documentary on intermittent fasting.

Michael wanted to learn more about longevity and optimum health without the use of pills or potions and similar stuff. Oh, it should be cheap and readily accessible too. Staying young and fit well into retirement.

If you haven’t watched the documentary, you should below if anything just to see the 101-year-old man running a marathon. Mind-boggling…

I don’t know about you but when I first watched the documentary I couldn’t help becoming emotional when the 101-year-old man had the medal placed on his neck at the finish line. You will also like Luigi’s bluntness. Krista’s input into the documentary is deep into the video.

Krista and Michael even shared a burger and milkshake together just to prove a point. Hmm, tasty!

The point being that intermittent fasting can still have positive impact in your life even with an unhealthy diet like processed food.
Michael and Krista looked like BFFs (means ‘Best Friends Forever’ in case you are not down with the kids) in the documentary.

In concluding the documentary, Michael made a tweak to Krista’s focus of research.

(Update: The documentary sadly has been taken offline. But the video below does show snippets of clips from the original documentary – you will still get the gist, although the scene between Michael and Krista is not included. Not the end of the world!)

Krista chose to study alternate day fasting as the focus (or model if you like) of her research. The extent of her research meant she gets quoted (her studies that is) everywhere. Michael was impressed with this.

However, in deciding to try fasting as a way of improving his health, Michael decided to make a tweak to Krista’s alternate day fasting, having come across this study by Michelle Harvie and her colleagues published in the British Journal of Nutrition.

The 3rd group were allowed as much protein and fat as possible but still had carb restriction for 2 days a week. The outcome measures were insulin resistance reduction and loss of body fat. The study ran for 4 months.

What they found in that study was that the 2-day intermittent fasting per week calorie restricted diets produced better results in terms of reduction in insulin resistance and body fat loss than the 7-day week daily calorie restriction. Michael was hooked.

He decided to experiment on fasting 2 days a week. His method was a middle of the road kind of fasting. Instead of a complete fast where no food is eaten in the 24 hours of the day, aside from sugar-free hot beverages, he preferred to restrict his calories to 20% of his total daily requirement.

To drum up publicity for his documentary, he had an interview with Daily Mail Newspaper journalist, Mimi Spencer, whom as if to test the validity of his claim tried out Michael’s fasting strategy. It worked for her too.

As normally happens in life, both Mimi and Michael developed a brain wave. Hey, we’ve got these amazing results, why don’t we write a book. Yep, sounds like a good idea. Not sure who first dreamt up the idea, but one of them sure did and the other complied. 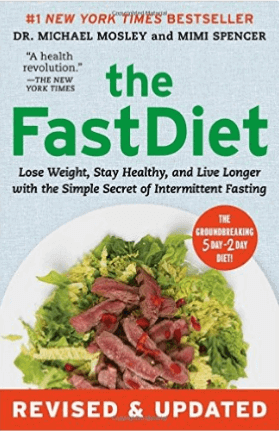 It sold like hot cakes powered by the BBC documentary and the Times article.

In providing scientific backing to what they did, Krista Varady’s work had to be quoted and referenced in the book.

> Krista was livid and seething with anger when the book got released. As you know, Hell hath no fury like a woman scorned.
Krista demanded that her name and her scientific papers be removed from future reprints and editions of the book.

Krista who is based at the University of Illinois felt her work had been taken out of context in Michael’s Fast Diet book.

How? Krista’s research is on alternate day fasting (ADF) which means individuals on her fasting model will fast 3 or 4 days a week alternately given that there are 7 days in a week. Michael’s model is fasting 2 days a week.

You cannot take the research results of 3 or 4 days fasting a week and extrapolate them on a 2-day-a-week fasting method, Krista argued. They are not the same as far as she was concerned and demanded a dissociation.

In fact, Krista requested all references to her research papers be removed from future reprints of Michael’s book. Michael was forced to comply when the 2nd edition of the book was published. Hmm, I did tell you it got catty. I wasn’t joking. From BFFs to ‘don’t mention my name, ever’. Friendship collapsed in a flash!

Over The Top reaction?

Oops, a few months later after the row, Krista reveals she’s written her book, titled ‘The Every Other Day Diet’. Now there’s a surprise. Want a copy of the book to see for yourself? Get it here on Amazon.com and here on Amazon.co.uk 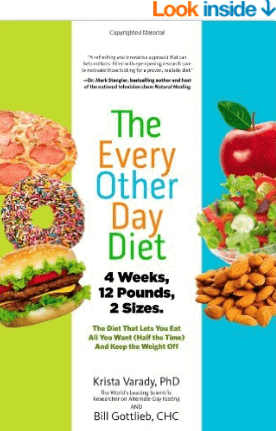 This then begs the questions: Was Krista angry because her thunder was stolen or because her research was misrepresented? Would Krista have raised any objections about 2-day fasting Vs 3 or 4 -day fasting had Michael co-written the book with her instead of Mimi?

Hmm, the mind boggles. I will leave you to draw your own conclusions. Obviously that relationship has turned frosty. In fact, it is on ice at the moment. Will it thaw out? Only time will tell. But for the moment both books are selling well, so no one has lost out.

Only someone else’s pride was hurt…just a tad.

It would appear Krista wanted to test out her idea some more with further research before writing her book or may be Krista was just too slow in actualizing her book idea. In the meantime, Michael smelt an opportunity and pounced like Bill Gates did to Steve Jobs.

A little lesson there for you all. If you’ve got an idea, run with it before someone else does. You may not forgive yourself when that happens and will be kicking yourself for just being a little too sluggish on the take-off.

When it comes to intermittent fasting, there’s one name that you mustn’t forget. His name is Brad Pilon.

He is the Canadian dude who brought back to life, this age-old idea of fasting as a way of optimizing our health. He is the Chief Protagonist. Brad practically dragged intermittent fasting into prominence.

Brad watched Michael Mosley’s documentary and had a word or two to say about it. Go read his review of Michael’s documentary here.