Spirulina and Vitamin B12 – Know The Risks

Let’s talk spirulina and vitamin B12.

I was someone who used to hoover up spirulina at least about 3 times a week. You really cannot blame me.

It was one of those superfoods that blitzed into our lives. After all, I wanted to be healthy. I was seeking good health.

Show me a superfood with nice health benefits and I will be all over it like a rash.

Spirulina was one of those foods just like dried purple laver (Nori). I used it because it’s an algae food.

At the time, I was strictly vegan and I wasn’t using any vitamin B12 supplements. But my dalliance with spirulina came to an end when I found out a shocking truth regarding spirulina and vitamin B12.

Why did my relationship with spirulina end?

Keep reading to find out…

Plant sources of Vitamin B12 are rare. Quite rare.

Spirulina was one of those foods that was considered a viable plant source of Vitamin B12.
That was old thinking.

The thing about science and nutrition is that the landscape keeps changing.
And that’s a good thing.

What was true yesterday will not be considered true today. And that’s because research does uncover new grounds, new discoveries.

You have to be prepared to change your position as science evolves around you. Otherwise you’ll be left behind.

Sometimes with devastating consequences.
And that’s the case with spirulina and vitamin B12. 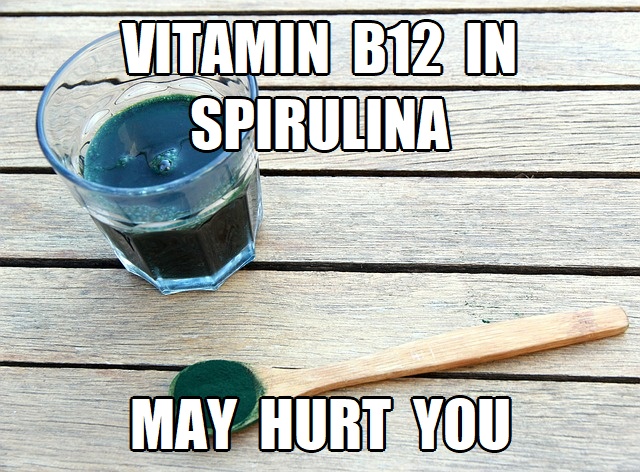 New thinking about Spirulina and Vitamin B12

Spirulina is not a good source of vitamin B12. Period.

What is wrong with the vitamin B12 in spirulina?

Because the pesudovitamin B12 will take up the receptor sites responsible for transporting the real vitamin b12 from the small intestine into the bloodstream.

What are the consequences of using spirulina for your vitamin B12 needs?

Competition between the pseudovitamin B12 in spirulina and the real vitamin B12 means you’ll end up with vitamin B12 deficiency.

What if I take vitamin B12 supplements along with my spirulina?

Taking vitamin B12 with your spirulina will be a complete waste of time and money.

That will reduce the bioavailability of the vitamin B12 from your supplements.

You’ll still end up with all the consequences of vitamin B12 deficiency.

Only a small percentage of the vitamin B12 that we consume is absorbed. Taking a food that provides a competitor for the genuine vitamin B12 will simply make the already precarious situation worse. 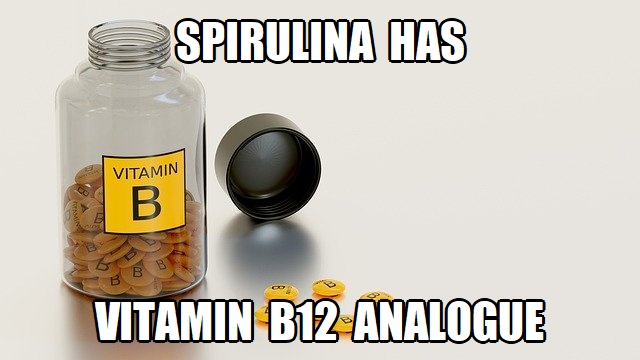 Why won’t the vitamin B12 in spirulina do the work of the real vitamin B12?

The pseudovitamin B12 in spirulina is inactive in humans.
Spirulina vitamin B12 is not bioavailable.

Hence, it does not perform the same functions in the human body as the real vitamin B12 from animal sources or supplements.

Bottom line is:
You should stop using spirulina as a food product forthwith unless of course you’d like to have the consequences of vitamin B12 deficiency.

Consequences like megaloblastic anaemia, significant neurological effects like degeneration of your spinal cord (which may be irreversible), psychiatric effects, cardiovascular effects like heart attacks and strokes etc.

As for spirulina, it is best left on the shelf, folks. Don’t bother with it.

Those sources are your best bet as far as fulfilling your Vitamin B12 needs.

Enjoyed this article? Say something below in the comments section