How Does Insulin Resistance Cause Weight Gain

I got a question the other day from one of my readers of this blog. And the question was; how does insulin resistance cause weight gain?

That is a very good question and I will answer it by going back to the basics first.

Let’s talk about how insulin resistance comes about first. 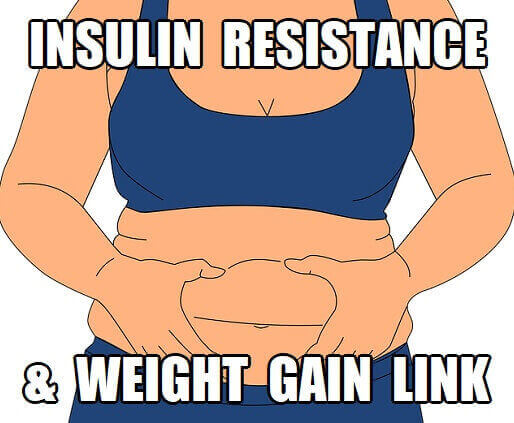 How does insulin resistance happen?
You will recall from my article on high blood sugars in non-diabetics, I talked about how the food, in particular a carbohydrate meal, when broken down to glucose triggers the release of insulin into the blood stream, right?

The idea is to stop the absorbed glucose in the bloodstream from getting too high. The trigger point is 100mg/dl (5.5mmol/l).

Once glucose levels exceed that trigger point, the beta cells in the pancreas will spring into action. The beta cells will release insulin to counter a further rise in blood sugar. That is the first phase insulin release. This happens following food digestion and glucose absorption from the digested food.

If the blood glucose level does not settle, a second wave of insulin is released by the pancreas to complete the job. The interval between the first and second wave insulin release is about 20 minutes.

In a healthy person whose metabolic pathway is well integrated and functioning well, this mechanism of blood sugar regulation works so well that within 90 minutes of commencing your meal, your blood sugar levels will be back to your pre-meal level of around 80mg/dl (4.5mmol/l).

Certainly, by the 2-hour mark, all should be settled on the blood sugar front and life goes on…quietly.

But when you have insulin resistance, life is not quite that simple.

Sadly, there could be a problem further up the blood sugar regulation pathway with insulin resistance.

The liver and muscle cells take up over three-quarters of the glucose sent up the blood stream from the food we just ate.

For the insulin to effectively reduce blood sugar levels, the liver and muscle cells have to be receptive and responsive to allow the glucose from the blood into the cells.

That’s where the problem lies with insulin resistance.

The question then arises. Why do the liver and muscle cells suddenly become unresponsive to insulin signals to allow glucose into them? They were responsive yesterday. What’s happened today?

Well, it’s not an overnight development. Insulin resistance by the liver and muscle cells is a problem that gradually evolves over time.

Over time, these liver and muscle cells develop tolerance to the insulin because they are being pounded all the time by insulin to let glucose into them.

Some people eat up to 8 times a day if you include snacking and it is mainly refined carbs we eat.

Each time you eat these foods, you are asking questions of your pancreas and also requesting your liver and muscle cells to respond to insulin signalling.

These cells “get fed up” of being constantly asked to let glucose in. Over time they become tolerant. Which means higher and higher doses of insulin will need to be pumped out by the pancreas to have the same effect.

As a result, the liver and muscle cells become unresponsive to signals from the insulin to allow the glucose inside their cells. They become tolerant. They become resistant!

Just like a drug addict will need higher doses of the abused drug over time as a result of developing tolerance to the drug.

This causes a build-up of glucose in the blood because the liver and muscle cells have ‘shut their doors’ and won’t let the glucose in.

I will return to the hyperinsulinemia later on because it is the core event that drives weight gain in insulin resistance. 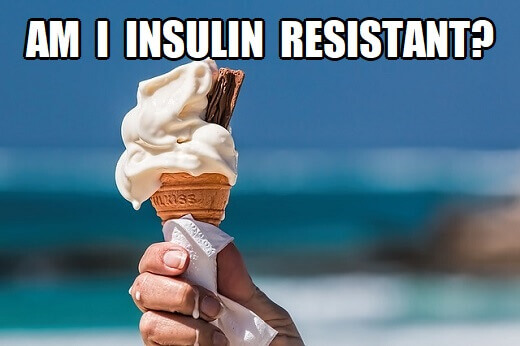 Am I insulin resistant?

Even the symptoms of insulin resistance (if you do experience any) grossly overlap with other common conditions.

That is what makes it difficult to recognise insulin resistance and it can go on for years carefully damaging your health quietly without you being aware of it.

So, are you insulin resistant?

If you test your blood sugar on one or more occasions and you are consistently getting results above the recommended acceptable blood sugar levels below, then that should raise a suspicion of insulin resistance.

That’s how simple it is. There are other tests like C-Peptide test and more expensive ones but they are ultimately not necessary to make a diagnosis of insulin resistance.

Alert your doctor if your home blood sugar test following your meals exceed the values below. Your doctor will take things from there. See this article on how to meal-test your blood sugar here.

If your 2-hour after-meal blood sugar is over 200mg/dl (11mmol/l), then you are diabetic. It means your insulin resistance has tipped over to type 2 diabetes.

You are eligible to be labelled as having metabolic syndrome if you have 3 or more of the following:

How does insulin resistance cause weight gain?

Insulin is a fattening hormone. That’s the first thing you need to know.

What insulin isn’t; is catabolic. Never.

When you have a lot of insulin floating around your body, you will constantly be in the anabolic state.

Ask anybody whose been started on insulin hormone by their doctor, they will tell you that without fail, they have gained weight.

More importantly, the weight you gain from insulin is very hard to shift. Weight loss is always frustrating for anyone on insulin therapy.

Evidence that insulin makes you gain weight, apart from anecdotal input from patients on insulin, comes from various studies.

This study for instance took 14 individuals who were taking diabetic pills, switched them from the pills to intensive insulin therapy.

The idea was to demonstrate that blood sugar levels can be brought under control within a specified time frame (in this case 6 months) without the patients developing low blood sugar side effects (hypo symptoms).

It transpired that the researchers ended up using large doses of insulin to reach their objective of controlling the study participants’ blood sugar. This was because the participants had developed insulin resistance.

The researchers did succeed in achieving good control without low blood sugar side effects. But this came at a cost. The study participants gained 8.7kg (19lbs).

Something else to note from that study was that the study participants actually reduced their calorie intake during the study period by a daily average of 300 calories. So, they gained weight across the board despite calorie reduction.

That’s how powerful insulin can be when it comes to fat preservation.

This other study sought to achieve good sugar control on 708 type 2 diabetics who were on diabetic meds by adding insulin to their treatment.

It’s a bigger study compared to the first one above. The researchers did achieve good control but again at the expense of weight gain in the study participants.

There was a proportionate increase in weight gained in line with the dose of insulin received by each study participants. More insulin, more weight gained.

One more study here sought to identify who amongst 50 obese individuals would predictively lose weight and maintain their weight loss through a 6-week calorie reduction regime.

The researchers found that resistance to weight loss and the tendency to regain weight was easily predicted by how much insulin each participant had circulating in their blood.

So, a high insulin level meant you will have difficulty losing weight and even when you did lose the weight, you were more likely to regain the weight within a shorter time frame. 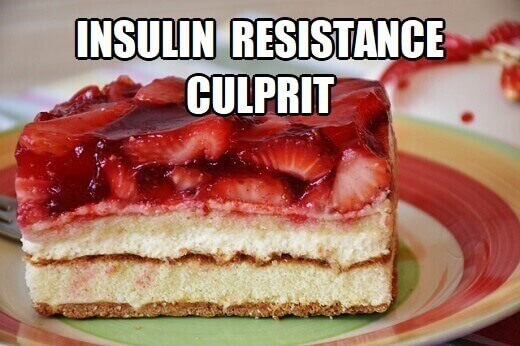 And here’s the kicker:

You’ll recall I said the liver and muscle cells which ordinarily will take up majority of the glucose from the circulation but are resistant to doing so even when prompted by insulin, right?

Well, something else happens that make it possible for someone with insulin resistance to gain weight.

And here it is:

Aha, can you see this generosity of the fat cells is not necessarily a good thing for your weight management efforts when you are insulin resistant.

Essentially, we have a scenario where the liver cells and muscle cells are resisting absorbing sugar from the blood circulation but the fat cells are “happy” to have the glucose where storage in the form of fat is the norm.

Liver and muscle cells are insulin resistant but fat cells are not.

Does this make sense to you now why and how insulin resistance leads to weight gain?

There are a couple of mechanisms at play here that conspire to make you gain weight when you have insulin resistance.

I thought it would be a good idea to provide you with a diagrammatic illustration of how insulin resistance develops.
So, see image below: 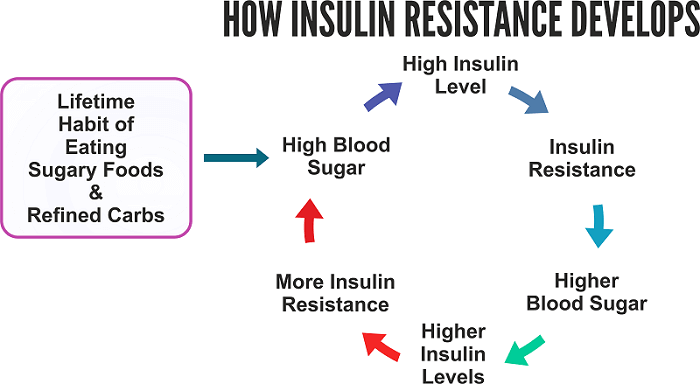 All of those ladies and gentlemen is how insulin resistance makes you gain weight and actually frustrates your weight loss efforts. Not nice!