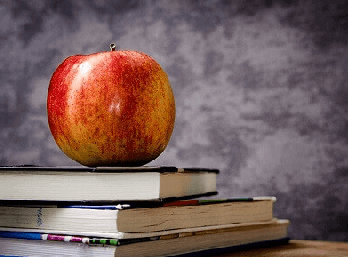 Is fasting healthy? The short answer to that question is: Yes, fasting is quite healthy…

…when used as part of a structured, deliberate eating plan either in the short term or long term.

Now, let’s talk a little bit more about fasting as a concept and more…

If you think about it our ancestors did not have abundant supply of food all year round.

There were no Walmarts, Acme markets, Safeways, Kmarts, Tescos, Waitroses, Publixes or SuperTargets grocery shops around at the time for our ancestors to access.

What does this mean?

It means food was not available 24-7. Restricted availability of food would inevitably result in periods of starvation depending on the man’s hunting availability. Gotta go without for periods of time. That was the name of the game, although not out of choice for them unfortunately.

Fasting has been used as form of treatment for certain ailments as well. Dr Edward Dewey (below) was one of the protagonists of fasting as a treatment modality in the 19th century. He was a doctor who had a firm belief in intermittent fasting as a method of treatment. Dr Dewey graduated from the University of Michigan Medical School in 1864. His belief in alternative medicine grew stronger the longer he practised.

> One of his proteges was a lady by name Linda Hazzard who started medical practice despite not being properly trained. She understudied Dr Dewey but took the concept of fasting just a little too far and was jailed for the death of a woman under “her care”. Any tool no matter how useful when abused can go badly wrong.

History has it that the Greeks saw some benefits in fasting and employed it as means to have mental focus when they needed it most. It worked for them. 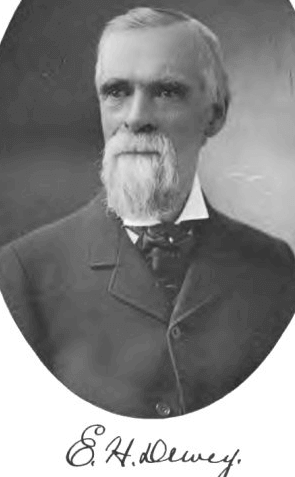 I am not the most religious person you will come across and I don’t pretend to know the scriptures inside out. I seem to know though that the icons that represent 3 prominent religions on the planet i.e Jesus, Prophet Muhammed and Buddha recommend fasting as a way getting closer to our inner self.

If these 3 religious icons felt fasting was dangerous to their followers’ health, would they recommend it? Probably not. Religious fasting is one way by which followers deeply cleanse themselves both spiritually and physically.

> Fasting in religious terms gives you an opportunity to cleanse your mind and your body. You would have noticed your religious friends who embark on a fasting journey do so year after year. There is a reason they consistently do it and they have always survived it. Fasting cannot be a bad practice after all, if they engage with the practice annually.

The untold principle behind fasting
You are probably familiar with the TV program called the Biggest Loser. It’s a program that is serialized in most 1st world countries.

A bunch of men and women go to a bootcamp. They are put on a restricted calorie diet and made to exercise like crazy. Do they lose weight? Of course, they do.

They are consuming less calories and burning a lot more than they are consuming, so the weight comes off. What happens when they leave camp? The weight gradually creeps in and they are back to where they were before they started the journey, right?

This is no news to you and I. It’s a similar thread to anyone who is looking to lose weight. They get serious and actually lose the weight. Get compliments from friends and 8 months down the line, the weight is gradually creeping back on. Back to square 1.

Someone once asked why the TV program, The Biggest Loser doesn’t do a reunion, say 2 years down the line after the initial shoot. Wanna know why? The answer is obvious. After all TV stations like to milk every program for all it’s worth.

Getting more mileage out of an old program is easy content they don’t have to work and pay for. But they wouldn’t do it for the Biggest Loser. Reason – Unsustainable results in the medium to long term, that’s why.

Is there missing piece in the weight loss puzzle that can be fixed?

> I suppose there are many pieces in the weight management puzzle but there is a basic element that seems to be missing – Insulin.

Something we (doctors, weight loss and fitness experts, nutritionists) have failed to realize is that, if we don’t fix the insulin issue, then whatever we do is just going to work only temporarily. Period!

Most individuals with weight problems have hyperinsulinaemia (high insulin levels). If you look at the graph below of a 24-hour insulin profile of normal weight participants and obese people, you will find that even at basal levels, obese individuals have higher insulin than normal weight folks. 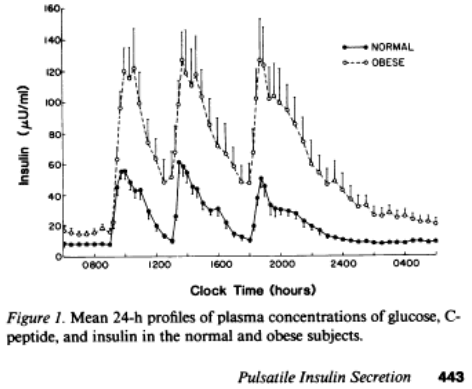 Insulin secretion in that study was back to baseline in normal individuals after meals and the secretion of insulin in response to meals was uniformly the same throughout the day even though normal participants ate smaller breakfast portion compared to lunch and dinner.

Insulin secretion in the obese subjects in the study did not decline back to baseline after meals and the levels before meals were higher too in comparison to normal weight individuals.

When you look at the spikes following meals, obese people spike way more than normal people.

What does this confirm?

> It confirms the fact that obese people have higher blood insulin levels throughout the day. The response may be the same but the way insulin behaves in obese individuals is different.

Not only are you insulin resistant when you are obese, you also become leptin resistant meaning there is decreased sensitivity to the leptin in circulation. Leptin usually participates in hunger regulation. Reduced sensitivity to leptin implies reduced response to satiety (feeling of fullness) all of these compounding your cravings and hunger pangs.

How does fasting fit into our fundamental insulin problem? Glad you asked. Well the proof of the pudding is in the eating, right?

Okay, show me the proof that fasting can fix insulin resistance?

If you wanted to look at how fasting affects individuals who fast, well you couldn’t select any better set of subjects for your study than muslims who consistently fast for one month every year during Ramadan.

Healthy Male volunteers were recruited into a study to see the effect of fasting on glucose, insulin resistance, adiponectin (a protein that’s involved in the development of insulin resistance) as well as insulin resistance. These parameters were measured just before the fast began and 4 weeks later into the fast. 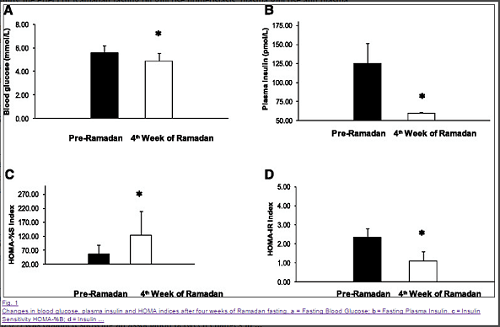 In the one month of Ramadan Fasting, it wasn’t surprising that the participants in the study dropped their body weight. In response to their weight loss, their adiponectin levels dropped and there was a correlation with the amount of weight lost.

More importantly, there was a consistent increase in insulin sensitivity and a reduction in insulin resistance as plasma insulin and blood glucose levels were lowered on account of the fast. The conclusion from that study being that intermittent fasting has a positive impact on metabolism.

> High density lipoprotein (HDL cholesterol) was elevated in these individuals, Low density lipoprotein (LDL cholesterol) was lowered as was Total cholesterol. In the same study just like the other one, there was a drop in body weight, total body fat and of course a drop in Body Mass Index (BMI). In this same study, the incidence of acute heart problems in individuals with pre-existing cardiac illnesses was no different in the fasting days and the non-fasting days prompting the authors to conclude that if you have a stable heart condition, you can fast without anticipating any problems.

More science that fasting is healthy can also be seen in the review which pooled a lot of studies together to do what scientists call meta-analysis.

The meta-analysis review showed that Total cholesterol and the fat that causes a lot of damage (Triglycerides) were lowered by the act of fasting in men. It also supported the finding from the other study that High density lipoprotein (HDL cholesterol) gets elevated during fasting especially in women.

Heck, the immune system is not negatively affected by fasting from that review and even kidney function is protected during fasting. The findings from this review and the other studies actually scientifically address some of the concerns or doubts regarding the safety and indeed whether fasting is healthy or not.

There’s a consensus of opinion that fasting can have dramatic effect on insulin levels throughout the day. This knowledge represents an opportunity for everyone with insulin-related weight or metabolic issues.

One of the reasons people lose weight when they actively try to, like in the TV program, The Biggest Loser, only to put the weight back on a couple of months down the line is that we fail to deal with the underlying insulin resistance issues. This is the missing piece in the puzzle.

> Intermittent fasting gives you an opportunity to fix that missing piece in the puzzle. Why, because if you can fix your insulin resistance and make yourself more insulin sensitive, then your blood insulin levels are lowered significantly. Lower insulin levels means you burn fat easily and also burn fat in the medium to long term.

With low blood insulin levels, you remove the roadblock or put in another way, you will have “access to the key to the vault” where both the subcutaneous fat and visceral fat are locked away for future use. 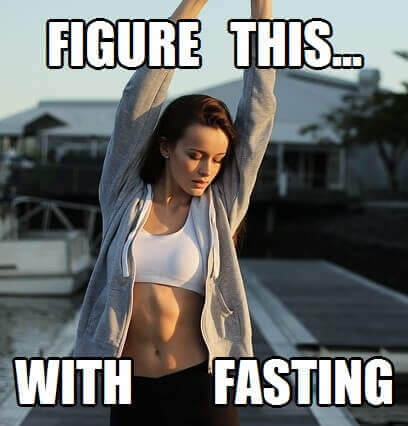 Two things happen when you lower your insulin levels.

First thing is; is you can raid the fat vault and draw on this reserved fat that is put away for use in times of starvation. In the absence of starvation, all the stored fat does is cause you all sorts of metabolic problems, some of which are life threatening in the medium to long term. Therefore, it is a good thing to get rid of the fat stores.

Second thing is; low insulin levels will stop you adding more fat to the bank because insulin is a storage hormone. When low insulin levels are low, fat preservation is discouraged. This is related to the first point. You cannot be raiding the fat bank and adding to the bank at the same time. It’s usually a one-way traffic.

The more you intermittently fast or the more seriously you undertake intermittent fasting, the more you raid your fat reserves, so total body fat including visceral fat stores diminish in response to exhaustion of the readily available carbohydrate stores. Exhaust the carb stores (glycogen), fat stores get raided next. Simple as that.

Incorporating intermittent fasting (the operative word there is intermittent), into your weight management profile would ensure that you keep raiding your fat reserves whilst ensuring you won’t be adding more at the same time.

The net result is that you can maintain your target body weight with intermittent fasting, using whatever weight loss mechanism you prefer whilst improving your metabolic profile at the same time. If only the contestants in The Biggest Loser could adopt intermittent fasting, they will surely keep the weight off in the long term and would be healthier for it.

If we all agree that fasting can help you reduce your insulin levels and make you more insulin sensitive and we also agree that high insulin levels has serious health problems like high blood pressure, prediabetes, type 2 diabetes, stroke, heart attacks, polycystic ovaries in young women and even dementia, then we can conclude that fasting when done intermittently in a structured way is actually a healthy thing to do.