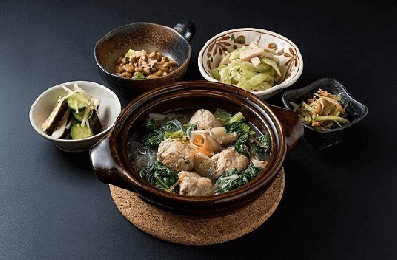 It’s about time I examined why the Japanese live longer compared to most other countries and in particular dissect the Okinawa longevity secret.

I love longevity stories and I am instantly attracted to stories of centenarians who not only have achieved something spectacular, at least in my opinion anyway, but have done so gracefully. Longevity arouses the curious element in me.

I always want to explore why and how a centenarian got to where he/she is. You can do no wrong by visiting Okinawa in Japan when exploring the subject of longevity.

With it’s beautiful landscape and culture-rich offers, Japan stands tall in the Western Pacific. A population of 127 million, gorgeous national parks and shrines & temples spread all over the country are some of the features that Japan boasts of.

The Japanese are quiet, unassuming people.

Hence they do not shout loud enough about a vital statistic that they possess. A statistic that most Western countries look at with envy. What is this phenomenon?

An island lies southern to the rest of Japan with an equidistance of 400 miles from the main Japanese island and off the coast of China. The island is called Okinawa.

Okinawa hosts the longest living people in the world. In fact, there are 34 centenarians per 100,000 people, which is more than three times the rate of mainland Japan and it would be interesting to uncover Okinawa longevity secret. Hopefully we can all learn something from it to introduce into our lives.

People don’t live long by accident generally speaking. There’s usually a couple of reasons why longevity sticks with certain groups of people. The question then arises: why do Japanese live longer?

Why do Japanese live longer?

All sorts of reasons have been attributed to their Japanese’ longevity. Let’s hear from Professor Kenji Shibuya of Tokyo University who published a paper two years ago which suggested three reasons for Japanese longevity. Pofessor Shibuya told the express newspaper:

“First, Japanese people give attention to hygiene in all aspects of their daily life,” he wrote. “This attitude might partly be attributable to a complex interaction of culture, education, climate, environment and the Shinto tradition of purifying the body and mind before meeting others.

Second, they are health conscious.

In Japan regular check-ups are the norm. Mass screening is provided for everyone at school and work or in the community by local government authorities. Third, Japanese food has a balanced nutritional benefit and the diet of the population has improved in tandem with economic development.”

Naomi Moriyama who authors of the book, ‘Japanese Women Don’t Get Old or Fat’ puts the main reason firmly in the court of nutrition and I agree. “But on balance and compared to the rest of the world an extraordinary number of Japanese live a very healthy lifestyle in large part because of what they eat,” says Moriyama

> What we eat is so important that it is difficult to ignore and indeed should be celebrated as the principal reason.

Then of course, there’s genetics. This brings me nicely to a specific subset of the Japanese population I mentioned earlier – The Okinawa tribe of Japan. The Okinawans have an even longer life expectancy. Book below available on Amazon.com and in Europe on Amazon.co.uk 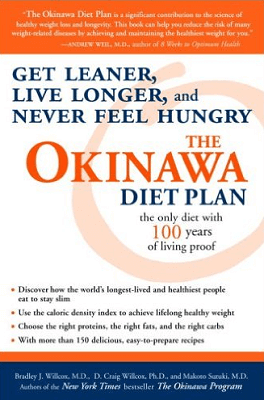 Okinawans have a lifestyle that is just a tad different from mainland Japan inhabitants. This is a likely factor as to why life expectancy in Okinawa is relatively longer than the rest of the Japanese population. For the Okinawans their longevity secret comes down to 2 reasons:

> Genetics play a small role whilst nutrition plays the more significant role for the Okinawans, probably 90%. When you look at the list of foods that constitute the Okinawan diet you will begin to appreciate why nutrition is the principal reason for longevity in the Okinawan tribe.

Here are the attributes of the Okinawa diet:

When I first started looking at what the Japanese ate, I had varying results from my research which is not unexpected. There’s going to be individual variations.

Here’s a typical response from Ms Kirsch of Quora: “Traditional Japanese home cooked meal tends to center around a main protein dish with several additional vegetable dishes to accompany it and is usually eaten with steamed rice, miso soup and pickles. This is also true for breakfast.

The main course can be fish, chicken, beef or pork. The Japanese are not fond of lamb due to its strong taste but will eat venison, near, bore and other game, particularly in the countryside.

There is usually some sort of seaweed included in the meal.

Flavorings are often based around, soya sauce, sake, mirin, (a sweet rice wine), dashi (stock made from seaweed and fish), and miso”

But not for the Okinawans. Okinawans are very traditional.

The Okinawa diet books go into details about how Okinawans lived their lives through food. We now feel that their diet may actually represent the Okinawa longevity secret. The Japanese Okinawa longevity secret is not a secret any more. Anyone can access it and you can start by acquiring those 2 books regarding Okinawa diet plan and Okinawa program: Available here on Amazon.com and in Europe on Amazon.co.uk 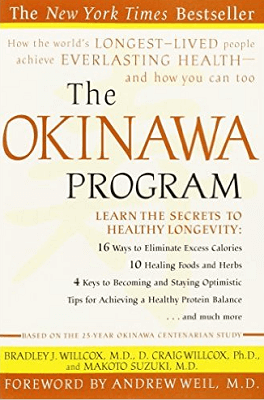 What is the Okinawa diet pyramid?

The Okinawa diet pyramid is an illustration of how the different classes and types of food are represented on the consumption scale as eaten by traditional Okinawans.

If you look at the Okinawa diet food pyramid below, courtesy of Wlicox and his colleagues, it clearly shows that the bulk of Okinawa diet comes from vegetables, fruits, legumes and complex carbohydrates. The Okinawa diet is clearly more plant based than anything else you would probably come across. 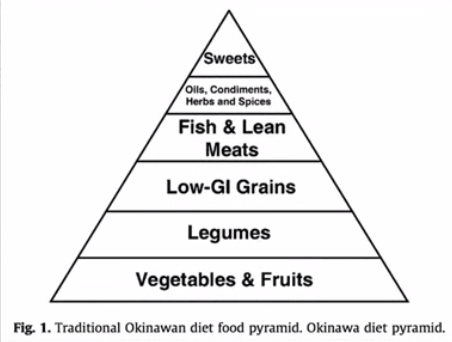 Beyond the Okinawa diet pyramid is a more elaborate list of traditional Okinawan diet. It will be obvious to you when you look at the list that traditional Okinawans are hopelessly in love with their sweet potato, so much so that they consume 5 times more sweet potatoes than rice and nearly 10 times more potatoes than wheat, barley and other grains.

> You could accuse the Japanese Okinawans of having a sweet tooth by virtue of the fact they love their sweet potatoes. But that “sweet tooth” is not geared towards refined sugar. Paradoxically, that “sweet tooth” plays a big role in the Okinawa longevity secret.

Okinawans love their legumes in particular tofu and of course tofu is made from soybeans. A Japanese Okinawan would eat 2 servings of Tofu in one sitting. Tofu has been found in research to be cardio-protective. That means Tofu improves blood lipid profile reducing bad cholesterol and increasing good cholesterol with an overall effect of lowering heart attack risks.

The Okinawa diet is quite anti-inflammatory and by extension protects Okinawans against age-related chronic diseases that afflict us in the Western hemisphere. 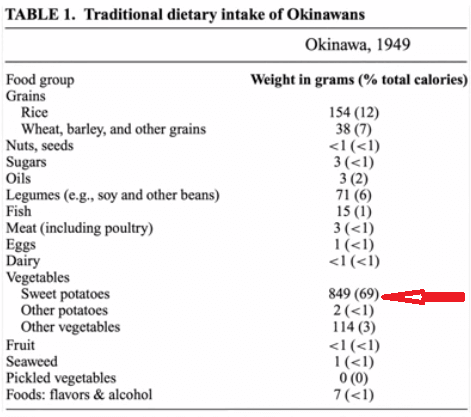 Suzuki and his colleagues wanted to confirm The Free Radical Theory of Aging and who better to test it on than aged Okinawans. In a way it was one way of proving the Okinawa longevity secret lies with little oxidative stress. The less oxidative stress one has, the higher the likelihood of living longer.

Oxidative stress causes release of free oxygen radicals that cause DNA disruption, and damage to cells, tissues and organs all of which leads to ageing and death.

A similar result was found in centenarian Italians as well from a previous study. Anti-oxidants are the weapons that fight oxidative stress thereby promoting longevity through suppression of cell ageing.

Foods rich in Vitamin C, Vitamin E, carotenoids and flavonoids. You will be glad to know that these anti-oxidants are obtainable from fruits and vegetables in your local grocery shop.

Below is a list of traditional foods eaten by Okinawans. Some of these foods are accessible to us in the West and if you want to adopt this lifestyle, you could start by looking into how to incorporate these foods into yours starting today. 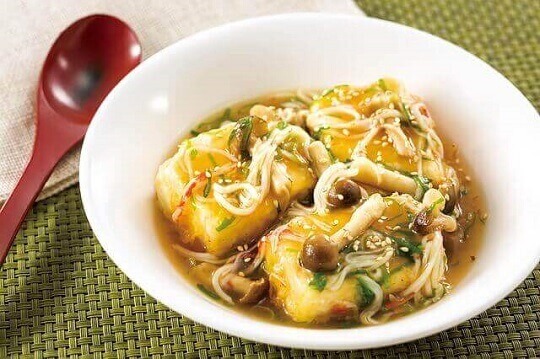 Tofu
Okinawans love tofu as stated earlier just like the British love their Fish and Chips. Tofu is good for the heart and blood vessels protecting Okinawans from heart attacks and strokes. Tofu can be stir fried to make Chanpuru. 100gm of Okinawa tofu will serve you 105 kcalories. Not bad!

Sweet Potatoes
Their brand of sweet potato is purplish. Sweet potato is a low glycaemic index food regardless of its sweetness because of it high fiber content. Sweet potatoes contain sporamin, an anti-oxidant that fights free radicals.

Oh and the sweet potato leaves are used as ingredients for the ever so popular Japanese miso soup. Nothing is wasted here, guys.

Rice
Okinawans eat both brown and white rice. The clever thing they do with brown rice is that they soak the rice in water before cooking it. Soaking the brown rice up to the point of germination (sprouting) makes it more flavoursome and improves the nutritional value of the rice as a bonus.

Shiitake Mushrooms
Found in decaying deciduous trees, shiitake mushrooms are used in traditional Japanese Okinawa miso soup, vegetarian dashi, in sauces and can be also steamed and sautéed.
Known to have an umami flavour which some people may not like very well, hence would prefer the sun-dried variety and of course the dried version has a longer shelf life.

Seaweeds
Okinawans love their seaweed. Mozuku, Wakame and Kombe are quite popular. The beauty of sea weeds is that they exemplify what high fber, low calorie vegetable can be.
For instance, Mozuku will yield a paltry 4 Calories per 100gm serving. How low can you get? Awesome. You can eat bucket loads of this stuff, be full to the brim and only get just a couple of calories.

In addition, consuming Mozuku, Wakame and Kombe seaweeds provides you with a carotenoid called fucoxanthin and minerals like magnesium, iodine, folic acid, calcium and iron. No wonder traditional Okinawans have BMIs in the low healthy range.

Goya
Goya is also known as bitter lemon. As the name suggests, goya has a bitter taste, so not usually eaten raw but it is used in stir fries especially dish known as goya-chanpuru. Goya has a rough exterior but the flesh does have a taste of a cross between an unripe avocado and courgette (zucchini).

Goya is also rich in micronutrients in the form of Vitamin B, Vitamin C, magnesium, folic acid, Iron and flavonoids. Goya is thought to have blood glucose lowering properties, so will be useful in people with type 2 diabetes, pre-diabetes and prevention of type 2 diabetes.

So there you have it folks. You now know why Japanese live longer and now have access to the Okinawa longevity secret.

Oh and one more longevity secret from Okinawa, you are only supposed to eat until you are 80% full. Apparently that is an age-old Okinawa tradition that is passed on from one generation to the next without fail. That’s a little tip for you and I to adopt in the West.