One question that bothers quite a lot of people is whether coffee does raise blood pressure or not. If you drink coffee, this is something you’d like to know the truth about.

And I am here to clear the confusion about coffee (and acffeinated tea) and blood pressure. And as a bonus you get to know if coffee will raise your blood sugar or not as well. How cool is that?

Is it possible that habitual coffee drinking may be contributing to the problem we have regarding high blood pressure worldwide? It is not impossible to think along those lines.

But I suspect such reasoning might lead us the wrong path.

Oh, let’s not forget. There are those who do not drink coffee but drink lots of tea with caffeine in them. Caffeine is not only present in coffee beans but also in a lot of tea leaves too. 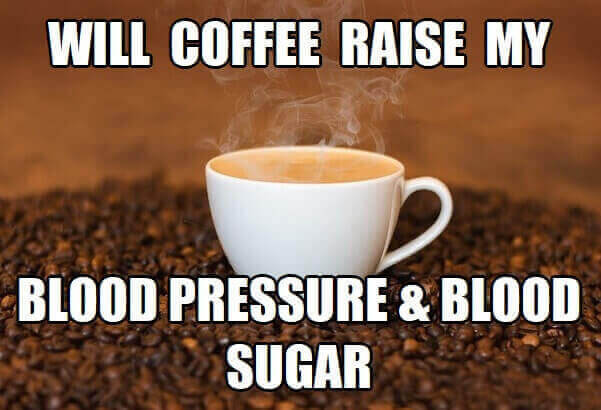 With many people turning to natural remedies for their health problems, it is not surprising that herbal teas like green tea and black tea have become a staple in many homes.

For instance, some people use green tea to help with their diabetes and sugar levels. There are claims that green tea can prevent diabetes and help control glucose levels, hence.

Green tea, oolong tea, black tea all come from the same plant. The plant is called Camelia Sinensis. What makes those teas different is the way they are processed.

What binds those 3 teas together is that they all contain caffeine. But these teas end up with different amounts of caffeine through the processing. You can try an experiment by drinking these teas at different times and see how their caffeine content gives you that psychoactive kick. Just like the kick you get from coffee.

So, if we are going to clear the confusion on relationship between coffee and blood pressure, we might as well include caffeinated teas.

How about we look at what the science is actually saying.

May be we should asking the question, does caffeine raise blood pressure instead of asking about coffeee only.

Here are some salient facts.

Which means your coffee because it’s got caffeine in it; will have that same pressor effect I talked about. So, coffee will raise your blood pressure upon absorption of the caffeine in it. Fact!

But by how much?

Well, good question but, even this query is not easy to give a ballpark figure. Because there are other variables to come into the mix and these variables confound the results of research too.

All of these affect how we respond to caffeine in general and coffee in particular.

Whereas, in this study, caffeine produced a systolic (top number) rise of 8 mmHg and 5.7 mmHg rise in diastolic blood pressure (bottom number).

Talking about caffeine means we can also talk about Green Tea and Black Tea because they both contain caffeine. In this study both the green tea and black tea produced a rise in blood pressure.

Black tea raised systolic blood pressure by up to 10.7 mmHg and 5.1 mmHg for diastolic compared to 5.5 mmHg systolic rise and 3.1 mmHg diastolic rise for green tea. This is not surprising because black tea has more caffeine than green tea.

So all in all, we should expect coffee to push up our blood pressure by around about 8 mmHg systolic (top number) and 4 mmHg rise in diastolic blood pressure.

It would appear that black tea will raise blood pressure more than coffee in comparison, looking at a lot of the studies I have examined. But of course, there are other factors to consider. Not least, being a habitual drinker.

Bottomline: Expect a rise in your blood pressure reading after consuming coffee or any caffeinated teas. The rise in BP is modest though. 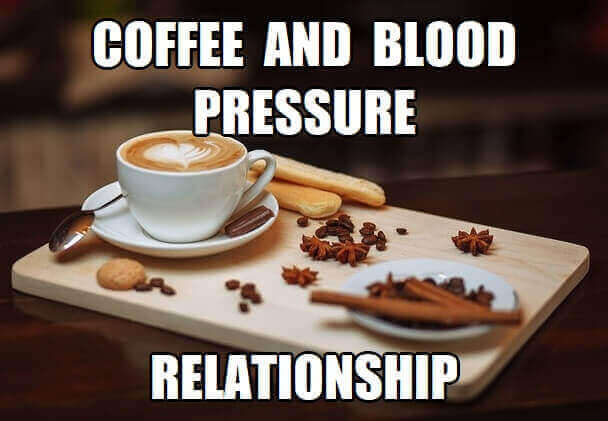 How soon after should we expect a blood pressure rise with coffee?

How long does the effect of coffee on blood pressure last?

Does coffee have a long term damage on cardiovascular health?

Does drinking coffee produce any long term damage on your cardiovascular health? Not really.
The blood pressure increasing effect of coffee (or caffeine) is in the short-term. When the subjects blood pressures were monitored over 24 hours in this study of tea, the caffeine effects on blood pressure were only seen in the acute phase but not in subsequent ambulatory BP readings.

In fact, this study tells us that coffee consumption is good for our cardiovascular health when drunk in moderate quantities. It says:

So, we can safely say that in the long term, coffee consumption does not appear to cause any damage to our heart and blood vessels. Because the effect of coffee on blood pressure is temporary.

What is safe level of coffee (caffeine) consumption per day?

I know this topic is about coffee drinking and blood pressure but a quick word about coffee and blood sugar wouldn’t go amiss for completeness. The reason is most people who have concerns about their BP reading when they drink coffee also worry about the effect of coffee (caffeine) on their blood sugar levels too.

Not to mention that they may be concerned about coffee and their insulin level.

Truth be told, just like coffee and blood pressure studies, the results for coffee (caffeine) and blood sugar are mixed.

For instance, this meta-analysis tells us that caffeine intake increases blood glucose levels. Not just that, in majority of the studies they pooled together, the study results suggest that caffeine intake whether it be from coffee or tea prolongs the period of high blood sugar levels.

Some other reports like this one did not make any significant association either way, so long as the intake of coffee or caffeine was limited to 2.5 mg/kg body weight per day.

Others like this one however indicate caffeine or coffee is good for type 2 diabetes. Meaning coffee has a protective effect and actually improves insulin sensitivity. So, consuming coffee means you need less insulin to drop your blood glucose levels.

Of course, what type of diet you’re on matters here. If you’re having a diet of refined carbs and refined sugar, I do not think drinking coffee is going to come to your rescue from spiralling blood sugars.

I can tell you from my own personal experience that coffee does raise my blood gluose levels; even though I am no longer diabetic. I would imagine that there will be a corresponding rise in my insulin levels too when I drink coffee too.

If you have type 2 diabetes and you’re having difficulty with your diabetic blood sugar control, it may be reasonable to reduce your coffee consumption levels. Because everyone is different. The coffee may be sabotaging your glucose control. 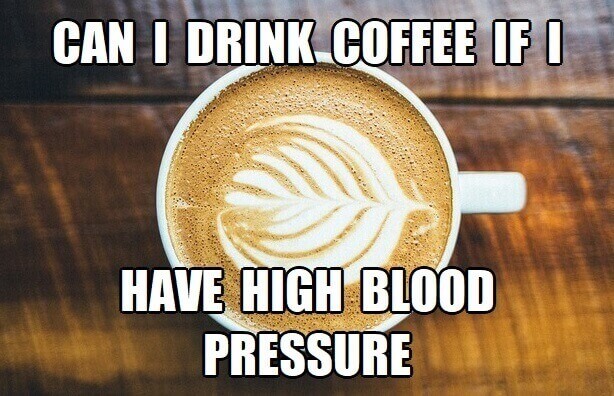 Of course, you can drink coffee if you have high blood pressure. But you need to be careful.

Now remember, I said earlier on that BP increase with coffee does last up to 3 hours. Imagine, if you are one of those people who drinks several cups of coffee a day.

Imagine a situation where you’re constantly topping up your coffee fix when you are experiencing a caffeine crash every 4 hours or so. What do you think will happen?

Your elevated blood pressure reading will be sustained. Because whenever your blood pressure is beginning to settle, you spike it again with your top-up coffee.

Can you see how you can sabotage your blood pressure control efforts by your coffee drinking habits?

Everyone is different when it comes to coffee and blood pressure. How?

This study tell us that genetic differences play a huge role in how we respond to coffee. Some people will metabolise their caffeine very quickly. Others will deal with their caffeine load a lot slower.

Which one are you?

Obviously those fast metabolizers are at advantage because they can quickly off-load their caffeine and will have fewer adverse effects on their blood pressure.

A slow metabolizer (like myself) will have a longer and arguably more profound adverse effect on blood pressure. Now, you see why I said you need to exercise some care regarding blatant use of coffee and other caffeinated products, if you have hypertension.

What should you do if you suffer from hypertension and you are a coffee drinker?

2. If you experience blood pressure changes, switch to decaffeinated variety. This should apply to both coffee and tea. The more profound the caffeine effect on your blood pressure, the more drastic you should do this.

3. If you must drink caffeinated variety for whatever reason, limit yourself to just 1 cup a day.

Those tips should serve you well in your coffee and caffeine lifestyle journey. Hopefully I have successfully clarified the coffee and blood pressure confusion.