Okay, let’s get direct. Does insulin resistance cause high blood pressure? Let’s explore that question on this page. This is very important because it constitutes part of the spectrum of the metabolic syndrome. A syndrome that is making us sick the world over. Worse in the Western hemisphere.

So, does insulin resistance cause high blood pressure?

The simple answer to that question is: Yes, insulin resistance does cause high blood pressure. In fact, the relationship is so strong that some scientists now believe that what we call ‘Essential Hypertension’ should no longer be called that.

If you have any doubt, ask your doctor the next time you visit him/her, if most people with type 2 diabetes also have high blood pressure. Your doctor will probably smile at you and will answer in the affirmative.

Yes, a relationship exists between hypertension and glucose intolerance without doubt.

The first thing to remember is that when you have insulin resistance, your insulin levels in the blood are going to be persistantly high. The reason is that your pancreas will keep pumping insulin into circulation to overcome the resistance of the cells to respond to insulin action.

Insulin’s primary job is to drive glucose out of the blood circulation into the cells of our body where the glucose is needed for energy production. In insulin resistance, the insulin receptors which are the “doorman” guarding glucose entry into the cells become desensitized.

Once desensitized, they are no longer responsive to signals to let glucose into the cells. The result is high blood glucose levels. This triggers further release of insulin from the pancreas as a compensatory mechanism. The idea being to lower blood glucose levels at all cost.

And because the insulin receptors on the cells are not “listening” to these signals, the result is higher and higher levels of insulin in the blood circulation. A sort of reactive hyperinsulinemia, if you like.

Imagine the pancreas as a pump station. It will keep pumping insulin until the blood sugar levels drop. Unfortunately those high levels of insulin in the blood circulation through a cascade of events result in high blood pressure.

So, how does insulin resistance cause high blood pressure?

There are 3 possible mechanisms. And they are all related to the high insulin levels.

The sympathetic nervous system raises blood pressure. That’s a direct response and is bad for your health. Someone with high blood pressure should be hankering for what I decsribe as ‘Parasympathetic Domination‘.

For instance, if you were confronted by a lion. The sympathetic nervous system will automatically take control. It is needed in that instance to protect you. For self-preservation, if you like. It automatically prepares you for the ‘Fight or Flight response‘.

When you have insulin resistance, the sympathetic wins the battle. Hence, it is bad news for your BP. 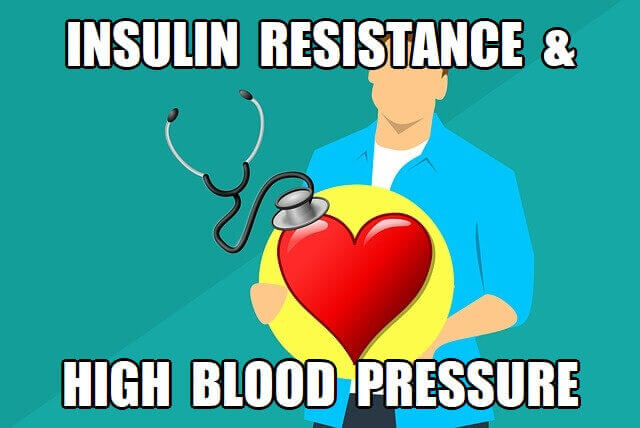 High insulin levels has an effect on what happens in your kideneys as urine is being formed. Normally the kidneys have a fine balancing act where they control how much Sodium is retained in the body and how much is expelled out of the body through urine.

This fine balancing act is influenced by a couple of substances in particular Aldosterone. This is done through a well co-ordinated system called the Renin-Angiotensin-Aldosterone System (RAAS).

But it would appear that when insulin levels are high, insulin gets in on the action too. Insulin influences what happens in the kidneys at high levels.

What does insulin do in the kidneys?

Insulin levels when high, facilitates retention of sodium in the body through the RAAS.

The overriding influence of insulin on the Renin-Angiotensin-Aldosterone (RAAS) is extensively reviewed here and here.

In fact, the relationship between insulin resistance and high blood pressure is so close that the class of blood pressure medications called ACE inhibitors like Lisinopril, Ramipril and the ARB medications like Valsartan, Losartan, Candesartan are thought to actually improve insulin sensitivity.

Mainly because those class of medications block the RAAS mechanism at various points which in turn reduces the influence of insulin.

Insulin facilitates reabsorption of sodium in the distal tubules of the kidneys. This is a problem for us.
Because sodium retention leads to water retention. Where sodium goes, water follows.

This the second mechanism through which insulin resistance causes high blood pressure.

Highlight: The net effect of sodium and water retention in the body is high blood pressure.

Mechanism #3 – Insulin resistance and your arteries

Persistent high insulin levels almost ineveitably leads to lipid dysfunction. Dyslipidemia is one of the hallmarks of metabolic syndrome.

Quite simply; insulin is a fat storing hormone. Insulin facilitates the storing of fat both viscerally and underneath the skin too. Along with that is the elevation of triglycerides and LDL cholesterol.

Over time, high lvels of LDL cholesterol (the bad cholesterol) and triglycerides, results in hardening of arteries. When arteries are hardened, they become inelastic.

If your arteries are in elastic, they are less stretchy, less relaxed. Blood pressure goes up because of the inelasticity. Obviously if the situation is allowed to prgoress unchecked, plaques will form in the arteries making the situation worse.

At the cellular level, insulin induces harmful vascular effects through the promotion of various growth factors. These growth factors cause narrowing of blood vessels and plaque formation.

Highlight: High insulin level is bad for the health of the walls of your arteries. Insulin is in fact, atherogenic.

What should you do?

You should assume that if you have high blood pressure, then you probably have insulin resistance until proven otherwise. Act on the basis of that premise.

Ideally you would want to check your blood fasting insulin levels but such a test is beyond the reach of most of us.

So the best alternative is to check your fasting blood sugar levels. It’s very simple to do. All you need is a blood sugar monitor.

Get a blood glucose monitor here from Amazon.com and if in the UK, get it here from UK Amazon.

Test yourself. Make sure it is a proper fasting blood sugar. So nothing to eat or drink in the morning before you do the test.

Make sure you test yourself at least twice on 2 separate mornings. If in doubt, do a 3rd test.

If your tests are high, then make an appointment to see your doctor both for confirmation and starting a management plan.

The essence of this self-screeing is this. Screen yourself for insulin resistance which translates as Pre-diabetes or Type 2 diabetes. It is a wise thing to do.

Got any experience with both conditions, do let leave me a comment below please.

You may also be interested in => Should I worry about my high cholesterol level?