9 Tips To Defeat Dizziness After Eating & Have a Happy Ending

Feeling giddy after eating is never a good thing and the feedback I get from individuals with this problem tells me it is something that can actually dominate their lives. 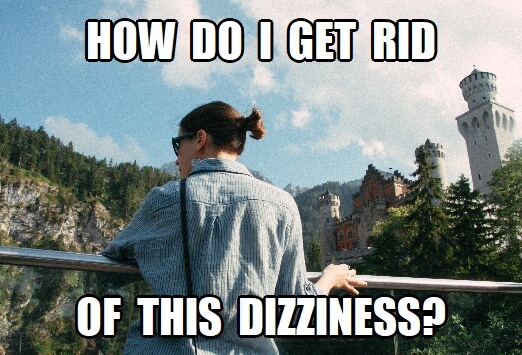 Of course, professional steps represent treatments that go beyond the realms of the average Joe Bloggs.

Going on the above, measures to stop after eating dizziness can be divided into 2 broad categories:

Apply these outlined tips below and you could be saying goodbye to your dizziness that happens after eating your delicious meal.

One of the things sugary drinks do is cause a blood sugar spike. For someone with a reactive hypoglycemia, this can be a problem. Why, because that sugar spike will be quickly followed by a drop in blood glucose (hyopoglycemia) leading to dizziness which is one of the ways low blood sugar manifests.

One solution to avoid dizziness after eating is to stay away from sugary sodas and other sugary beverages. I won’t also advise you to have the so-called diet sodas instead. They contain Aspartame which is not good for you any way. Drink water. It is safer and has no calorie value.

2. Eat Often
I know this is a little tricky when you are trying to avoid after eating dizziness or light-headedness. A distressing problem that is associated with eating. I can hear you saying, heck, I feel dizzy or giddy when I eat and here you are, telling me to eat more frequently.

Wouldn’t that make the problem worse? No, it wouldn’t, if you eat the right foods.

This approach is ideal for people who have problems maintaining their blood sugar levels with long intervals between meals. If you are that type of person, then frequent meals will be the way to go.

But do bear in mind though that the food portions I am talking about have to be small and therein lies the problem.

Some people’s definition of ‘small’ could be my ‘big’. You have to apply common sense because if you eat heavy portions frequently, then obesity will be knocking on your door. Simple as that. And as you know, obesity creates all sorts of problems on its own.

What’s my definition of eating often? Well, about 6 meals a day. But remember, SMALL.

3. Eat Complex Carbs
One way to stop dizziness after eating is to incorporate complex carbs into your diet. Complex carbohydrates have the unique characteristic of being digested slowly.

Why is this important?

Slow digestion means your blood glucose rises gradually instead of sharply. Your body prefers a gradual rise in blood glucose after you have eaten because such a rise is a lot more metabolically friendly.

Low glycemic index complex carbs will avoid the metabolic chaos that can lead to low blood sugar which ultimately can result in giddiness and light-headedness soon after you have eaten.

4. Avoid Processed Carbs
Just like you can treat dizziness after eating by avoiding sugary drinks, so can you do the same by avoiding processed carbs and indeed junk foods for that matter.

Same reason as stated previously. Heavily processed carbs will cause a sugar spike a and an insulin spike correspondingly.

The result: Your blood sugar level may crash with the high insulin levels resulting in hypoglycemia. How do you feel when your blood sugar is low? You will feel light-headed, giddy, dizzy amongst other symptoms. Not nice! 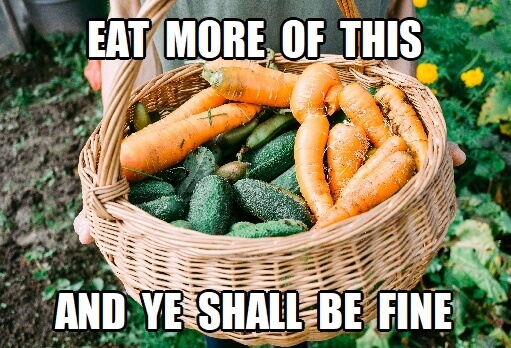 5. Eat lots of vegetables
You can treat dizziness after eating just by having more vegetables in your diet. Most vegetables are low calorie high nutrient foods that are actually good for your body anyway. So, your body needs them.

The idea is to prevent blood sugar spikes. Maintaining your blood glucose on an even keel stops after eating dizziness.

6. Be Careful with Exercise
Exercise is good for you in all sorts of ways. That much we know and indeed we advise having 150 minutes at least of exercise every week.

This extraordinary demand on your heart could result in a fall in blood pressure which would lead to giddiness, dizziness or light-headedness after eating.

If you have a problem with after eating dizziness and you are keen to exercise, my advice would be wait at least 2 – 3 hours after eating before you engage in any exercise activity. That delay between eating and exercise is a good approach to avoiding feeling dizzy after eating. 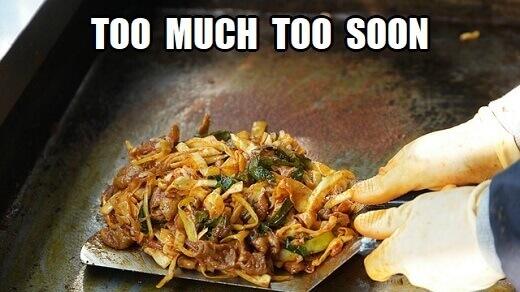 7. Drink Plenty of Water
Drinking plenty of water ties in with the exercise advice. If you are going to engage in vigorous exercises, then you need to properly rehydrate yourself, if you want to avoid after eating dizziness.

Some of us will advise drinking to thirst, others will say drink about 4 ounces of water every 30 minutes when doing vigorous exercise or when the weather is very hot.

Outside of exercise, it generally makes sense to drink a glass of water (about 500 mls) before you eat. Why is this? The water will get absorbed before you start your meal and would be an ideal panacea for keeping your blood pressure steady when you start eating.

This tip is very important for those folks who have after eating dizziness after first bite or those who have dizziness immediately after eating. Drink at least 500 mls or if you can handle it, a pint of water which is 750 ml about 10 – 15 minutes before you start eating.

8. Keep Food Portions Small
I know I did mention about eating frequently previously but I think I need to emphasise another point leading on from that.

I am talking about food portions.

I did talk about the mechanics involved in after eating dizziness here. Go read it, if you haven’t yet. One of the things that will potentiate a significant drop in blood pressure when you eat is having a large portion of food.

Yes, food can be tasty, I know, especially fatty foods. The temptation then is to eat unusually large portions sometimes without realising you have. You are not helping yourself in that situation.

If you want to stop after eating dizziness, you will be doing yourself a huge favour to keep your food portions on the small side. You will be giving your digestive system less work to do when you adopt this method of eating. 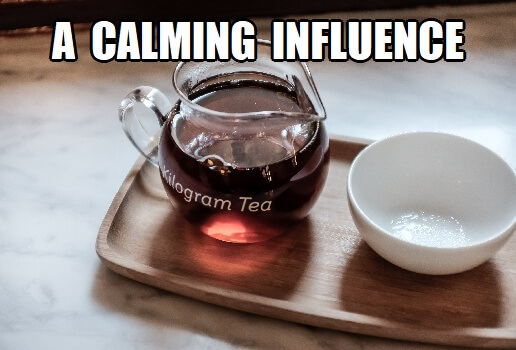 These guys have either drunken the ginger before eating or had the ginger with their food. Ginger does have a calming effect on the stomach. That much we know.

Well, I have included the ginger tip here even though this recommendation is not based on scientific evidence. Why? For the simple reason, that even if it doesn’t work, you lose nothing because ginger has so many other benefits.

And ginger does your body no harm. So, you lose nothing. Worth a try!

By and large, some professional help will be required to treat after eating dizziness in stubborn cases or in situations where a medical cause has been identified.

This means the treatment for the problem would be targeted at the identified cause.

If for instance, you have reactive hypoglycemia and following investigations, you are now diagnosed to have prediabetes or frank type 2 diabetes, then of course, your health professional would come into the picture. Your health professional will assist you to treat the dizziness after eating by managing your prediabetes or type 2 diabetes in that instance.

Or if you had been diagnosed to have insulinoma which is rare beta cell tumour of the pancreas, then you are probably going to have to need surgery to have the tumour excised. That’s how the dizziness after eating will stop.

If the cause of the problem is some prescription medication that you are taking, then you are going to have a chat with your doctor to have either the doses changed or the medication stopped by your doctor whilst he substitutes it for another med.

I could go on and on about the different medical scenarios but you get the drift. Identify the cause and treat the cause to treat the after eating dizziness or light-headedness.

Suggested further reading:
The Worst Food For Your Thyroid